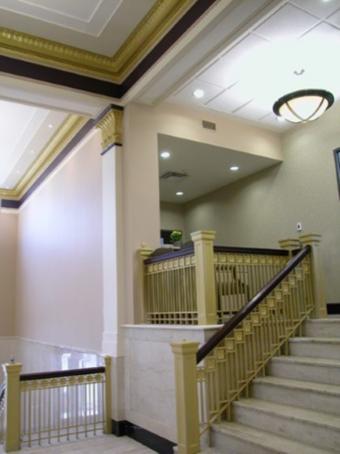 The project consists of the adaptive reuse of 2 structures, built in the 1920’s for the Hydro Electric Power Company of Ontario: the Screen House and the Power House.  At the time of construction, the Sir Adam Beck 1 plant, (originally known as the Queenston-Chippawa plant), was the largest hydroelectric power generation plant in the world.

The project included the rescue of a historic structure, the Screen House, located on the Niagara Parkway, which had been largely unused for many years. The badly neglected foyer and reception, referred to by OPG as the Hall of Memory, was completely restored to its 1920’s splendor with the replacement of windows and doors, restoration of travertine flooring and marble wall paneling, and the restoration of plaster ceilings and column capitals. The building’s interior was upgraded to meet current office standards with new mechanical and electrical systems, stairs, elevators, washrooms and architectural finishes.  Additional floor areas were created by inserting a 4-story structure into a portion of the existing 45' high by 600‘ long Screen House hall.  The building now provides office space for OPG’s safety, environment, finance and engineering support staff, which have been relocated from Toronto to provide on-site services at the plant.

Located over 200 feet below the Screen House, at the bottom of the Niagara Gorge, on the edge of the Niagara River, the Power House project consisted of the adaptive reuse of industrial storage and maintenance space into administrative offices for local Niagara Plant staff. The 5 story renovation included the complete replacement of mechanical and electrical systems, installation of new doors and windows, the introduction of a new exit stair tower, washrooms and locker rooms and the provision of architectural finishes in a building that had been originally constructed to function as a power plant.

The most significant design challenge was the provision of a new stair that would permit safe evacuation of the building in case of fire. Two options were explored:

(1) Cut a core through the middle of the building within the existing building envelope, or,

(2) Provide a stair that climbed the exterior of the building placing doors at existing window openings to avoid having to cut through the 24" of concrete wall that protects the in habitants.

The decision to design an external stair provided for greater office floor area and an opportunity for architectural expression in the design of a steel framed stair tower with glass extending up five stories from the ground looking up the length of the river. Because the building facade steps back at the two upper most floors, the stair transitions into a roof top lobby and encourages use of the roof surface for break-time activities.

All renovation work had to be coordinated around the requirements of an electrical plant that was in full operation at all times.