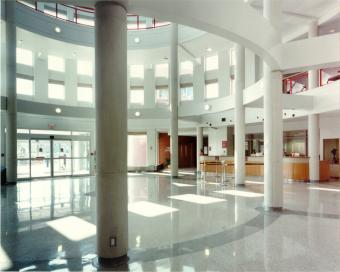 The Walker Family YMCA of St. Catharines, was constructed in 1994 as a joint venture with Shore Tilbe and Partners, Toronto. The 98,000 sq.ft. $10 million facility, replaces a classic 1928 structure unsuited for modern programming. The St. Catharines branch was built during a wave of new YMCAs across Southern Ontario in the 1990s. The large, open expanses in this building are unique to those built at the time, achieved through the sprinkler system design and particular location of fire walls. The internal transparency is exemplified by a 3 storey rotunda at the entrance, overlooked by upper fitness areas, and glazed observation areas for the competition-sized pool. A running track circles the perimeter of the third floor with views to the exterior, swimming pool, second floor fitness area and rotunda.

In 2003/4, a two phase renovation and addition was carried out. The first phase involved improvement and expansion of the parking area. The following year involved a new water park splash pad, and second floor expansion for increased exercise area and fitness studio.